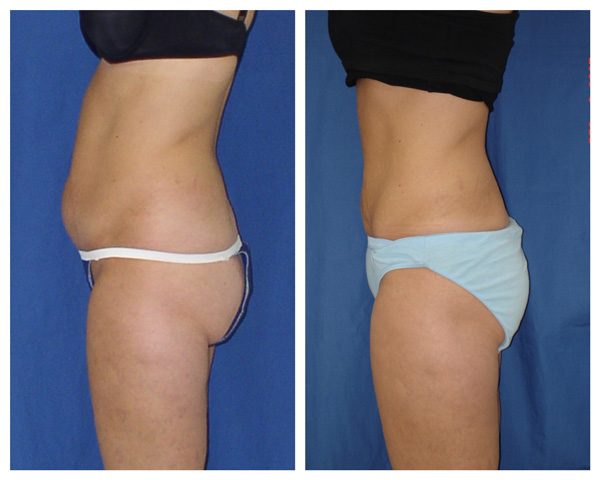 Most patients can return to work and begin exercising again within a day or two after surgery. An elastic support garment is worn for several days after surgery. About 90% of patients can actually see at least some improvements in their silhouette by one week after surgery. However, because of the slow resolution of post-surgical swelling, the ultimate results following liposuction usually require 12 to 16 weeks to be achieved. The fat cells that are removed by liposuction do not grow back. The patient’s new, more pleasing silhouette is permanent. If the patient later gains or loses weight, the change tends to be distributed proportionately over the entire body. The change of the silhouette produced by liposuction is equivalent to focusing the effects of dieting to specific areas of the body. The degree of skin change after liposuction is the same as one would expect after having lost an equal amount of localized fat by dieting, however this procedure is not a substitute for weight loss. Since the fat is removed by suctioning small “tunnels” through the fat, the skin remains intimately connected to the underlying muscles by fibrous attachments. As healing occurs after surgery, these fibrous strants contract and pull the skin into close proximity with the muscles. It is this process which assures that the skin will not hang in loose folds after liposuction surgery. Because the surgeon is careful to leave a thin blanket of fat attached to the skin, the skin will look and feel soft and normal after liposuction. By magnifying the fatty compartment, the tumescent technique permits more accurate removal of fat with greater assurance that the liposuction cannula will not inadvertently be allowed to approach too near the undersurface of the skin which would cause irregularities. Thus, the tumescent technique technique helps to minimize the risk of post-surgical irregularities or rippling of the skin.

Although the results of liposuction are often quite spectacular, it is not realistic to expect perfection. Liposuction of the thighs, while improving the silhouette, does not necessarily eliminate the subtle “puckering” of the skin often called cellulite. Cellulite results from the pull of fibrous tissue that connects skin to underlying muscle. Liposuction with the tumescent technique may reduce the degree of cellulite, but it is unlikely to eliminate it. As with any surgical procedure, liposuction is associated with certain expected side-effects such as bruising, swelling, and temporary numbness. Although irregularities of the skin are possible following liposuction, this side-effect is minimized by the tumescent technique. As judged by current worldwide experience, liposuction is amazingly safe. Serious complications such as blood clots, infection, and allergic reactions are extremely rare. Most of the dangers associated with surgery are related to the type of anesthesia that is used. Surgery of the skin and subcutaneous fat is safest using local anesthesia with the patient awake.